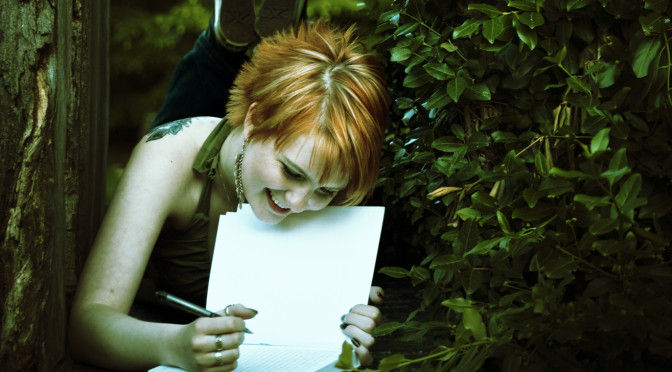 Wednesday night during an interview, I was asked to describe my writing style. I gave a little explanation about how I tend to speak from personal experience, I try to make the jumble of thoughts in my head accessible to other people, and to be conversational about it. I don’t ever want what I write to be difficult to read.

I started stewing over how this became my writing style, and hours later, I decided that blogging about the way I blog was not too meta for my own blog. So here’s my attempt at explaining it.

First, we have to talk about my mother. My mother is a brilliant woman. We have our differences in many ways, but I’ll be the first to tell you she is a tremendously intelligent individual who understands very complex things, particularly of philosophical and historical interest. She remembers statistics with ease, can give a detailed and thorough explanation of historical records off the top of her head, and has kicked my ass in Scrabble more times than I care to recall.

She is an academic and an elite. She possesses a Masters degree and pursued a Doctorate for quite some time. I am fairly certain she will never truly forgive me for not becoming a lawyer or getting an advanced degree past the five years I spent in college.

My mother was responsible for my education growing up. At ten years old, I used to pull college textbooks off the shelf, Intro to Abnormal Psychology and other odd subjects, and I’d read through all the materials and beg her to test me on it. At the time, she was teaching college courses on this, so she’d often print me one of her midterms and have me take it. I think if her students didn’t do well on their exams she’d use my test as an example: My ten year old got a 92 and you couldn’t pass?

College was a simultaneously humbling and empowering experience, as my intelligence was briefly questioned with my age, but my ability was evident. I learned how to be a little less arrogant and a little more friendly when I was talking to people I disagreed with. I learned that losing an argument was okay – at home, being proven wrong was my greatest shame.

Looking back, my college writings tend to make me cringe. They had a strong respect of the 4th wall, not speaking in the first person, and a flowery overuse of words. Things like: One must frequently consider in the implications of state as a solution to the problems inherent in human social atmospheres that, in fact, the very existence of the state does present such other problems as the monopolization of violence and the consequences that history has already revealed.

Who the fuck wants to read that shit? What the hell does that even mean?

My college essays were generally graded highly, and it wasn’t until sometime after my Associates Degree (2005) that I began applying pruning shears to my words. I had a blog on Livejournal and I frequented AOL Message Boards. I started to realize that sounding smart was not nearly as effective as being clear about the ideas I was trying to get across.

It was around this same time that I got my first job. I worked in retail, as a sales representative for Wilsons Leather. I loved that job. I had really awesome co-workers and every day new people came into the store and I had to sell them items.

I learned to talk to people I had nothing in common with. I learned to shut my mouth and not argue with people who were asserting different ideas than I had because it wasn’t the time or place. I learned that my customers didn’t care how smart I was, they simply needed to know that I knew enough about the products I was selling, and could ring them up. I had to make myself useful, and my IQ didn’t matter to them. I simply had to answer their questions – clearly and concisely.

As this trend in my life continued, my writing became progressively more informal. I stopped regularly blogging as I attempted to come to terms with each essay not having to sound like a published magazine article.

I realized that I was given an incredible gift: I was raised on and taught complex topics, on philosophy and politics and various ideas. I can wrap my head around things many people cannot. But I have honed an even more important skill: I know how to explain complex things in simpler ways. I started thinking of myself not as a writer or a philosopher but as an interpreter.

I began to learn how to explain my political philosophies, economic understandings or moral questions in ways that other people could grasp. People who didn’t have years of education, and people who don’t have time for it.  Heck, people who aren’t even that fond of reading and won’t take kindly to being handed a list of books and told to digest them thoroughly and then come back to argue.

I love meeting someone new with a different background and talking to them for a while so I can learn their “language” and the ways in which they express themselves. I love to develop my ability to meet them in their reality and their communication style, and translate what I mean into theirs. This is easiest when I know the roots of my ideas and have broken them down to their simplest components.

I realized that I have no desire to be the only person (or one of the “elites”) who understands the concepts I consider. I have no desire to stockpile information and ideas someplace where others cannot access them. I tend to hate hierarchies, why would I embrace them in intellectualism and academia? The point of learning is to understand, and the easier that is, the more of it you can do. Understanding breeds compassion, compassion breeds peace and liberty.

The world is full of artificial barriers to access, it is full of rejection and exclusive association. I do not like this. These things do not benefit good ideas. Good ideas should spread, they should take hold and be adopted and evolve with each new person they touch. Good ideas should flourish and grow and reach the very top and the very bottom of our world. Whether it’s open-source technology or new teaching methods or Wikipedia or sharing your patents, if you want your ideas to improve the world, they need to be accessible to as many people as possible.

So, I have no interest in being an exclusive club, in my feminism or my libertarianism or my nerdiness or any of my other self-defining factions. I have no desire to use the knowledge I have to only *be* better than other people. I want everyone to be better by understanding more. I will not create artificial barriers to access, I will break them down as often as I can.

My amazing professor Gene Rice once told me that “you haven’t really learned something until you can teach it to somebody else”. I’ve always taken that to heart. But am I a teacher? No, I don’t think so.

I “interpret”. I interpret complicated literature or deep philosophy or economic lectures so that anyone can understand them. I interpret my experiences that have applicable lessons about life. I interpret the ways things connect to one another and the complexity of intersection.

All along, I also remember that information is fairly useless if you can’t do something with it. I’m not that creative or original, I doubt I’ll invent something extraordinary or free a generation with my words. But whether I manage to accomplish something with the limited understandings I can possess in my short human life, is inconsequential when compared to what I accomplish when I can spread those ideas beyond myself, and hope that someone they touch does something amazing with them.

I seek to be accessible, to be understood, to be useful and to be helpful. I’ve always been fond of words as my medium for that. People who know me in person know I can’t shut up, and people who see my Facebook know the same.

So my writing style evolved from all of this. From the brilliant intellectual who raised me, from the elitism inherent in much academia, from the complexity of people trying to build something from simple truths like freedom or equality. From the fact that ordinary people aren’t incapable of understanding concepts I hold dear, they’ve just been denied access to them for a variety of reasons.

I love to translate complexity and I love to share knowledge that should not be exclusive. I love the mind, and the things people can do with concepts they’ve never considered before. I feel a responsibility to amplify ideas I think are good, and that isn’t just done by shouting louder than everybody else.

I am not the philosopher or the epic writer, I am not the figurehead or the leader, the public speaker or the entertainer. I am simply an interpreter, and I’m doing the best I can.

4 thoughts on “The Interpreter”