Boston was my home before I moved West. Boston will always be “home” to me, that place I go to see the family (blood and chosen) that made me who I am.

This afternoon I received the news that two bombs had exploded at the finish line of the Boston Marathon in Copley Square. Copley is a familiar place to me – I used to work a block away, and I’ve watched the Marathon go by many times, in the past I’ve greeted the runners as they finished their 26 mile run.

As usual, when a tragedy strikes, things are chaotic. Reports were coming in from every media source, I sent and received dozens of text messages checking on the whereabouts and well-being of the people I know and love in the area.

It’s been six or seven hours since the first bomb went off. We still don’t know who did it. We don’t know the full count of people injured, though there have been two confirmed dead. We don’t know much, and news media simply recycles the same story until there’s something new to add. We are surrounded by images of emotion, of blood and pain and smoke and fire, and incredible videos of people who ran towards the explosion, towards the people there who needed help. There is such a mix of feelings – the pain of knowing that some humans do this to one another, but the hope found in knowing how many come to help, how many come, selflessly, to give, and reach out to one another, strangers united by their humanity. 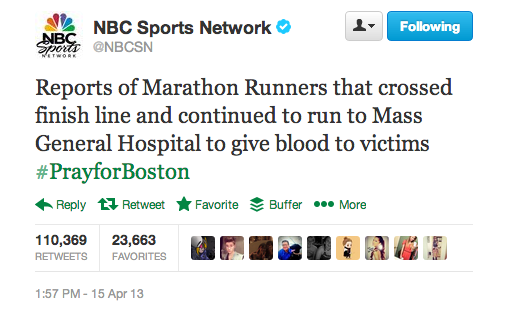 When the dust has settled and we’ve learned more and had time to try to make sense of this tragedy in Boston, perhaps we’ll take a moment to reflect on the fact that being the victims of bombing, whether foreign or domestic, is a terrible thing.

Maybe as we heal from this hurt, we can take some time to learn where other bombings have taken place in the world lately. Maybe we can try to help. Maybe we can try to stop them. Maybe we have that power. Maybe it’s time to look to our leaders and demand we no longer be responsible for this feeling we’re experiencing, experienced by others around the world.

No person, no nation, no people should feel what Boston feels today.

I was camping in the woods on July 22nd, when Anders Breivik opened fire and killed over 70 people in Norway.

I missed the American media mess of misplaced blame and inaccuracy.  I got back into civilization on July 25th, by then they had figured things out.  However I heard about it, and I feel like Steven Colbert did an excellent job of summing up my thoughts on the subject of knee-jerk journalism.

Along the lines of knee-jerk reactions, I enjoyed this article on how it’s not Islam, it’s Fundamentalism of any faith that causes these sorts of problems.

I’m amused by The Right now claiming Breivik isn’t really a Christian.  They are outraged and offended by the media “labeling him a Christian”.  Sorry, O’Reilly, he is.

I definitely found this particular article interesting, where the writer discusses the crisis of legitimacy – the similarities between American “Birthers” and Breivik’s belief that his own government is illegitimate.

At the end of the day, the events in Norway shocked myself and the world.  They remind us that terrorism can’t be marginalized to a single demographic – it’s not just one religious path, not just one skin color, not one social class.  There are people out there who believe that killing other people, innocent people, will help their cause against their “enemies”.  They are motivated by rationalizations that terrify me, a sincere belief that there is no chance that they are wrong, no perspective to their idealism.  They are fundamentalists – and blood is a perfectly acceptable cost for their cause. END_OF_DOCUMENT_TOKEN_TO_BE_REPLACED