I have two small parrots in the passenger seat of my car for this trip across the country.  When I tell people that, they tend to look at me like I’m crazy.  Where will I keep them when I stop on the trip?  Aren’t they loud?  Won’t they fly away? Who the hell brings two parrots on a cross-country drive?

I have given up custody of these dear children of mine once since I’ve had them.  A painful nine months where I simply could not have them due to my housing situation.  It was hard.  I didn’t see them the entire time because I didn’t want to feel guilty saying good-bye every time.  They were in good, capable hands.

Since I got them back – fourteen days has been my limit.  The longest I will tolerate being away from them.

When I was a kid, I wanted a pet, and my mother told me I was allergic to cats and dogs (not true, different story).  So we got me a pair of budgerigars.  Small birds, colloquially known as “parakeets”.  Two turned into four, and my interest in birds grew, so I slowly acquired more – bigger each time.

When I was twelve I started pursuing the idea of a larger parrot for a pet.  A local bird-breeder and rescuer named Linda introduced me to a small parrot she’d recently rescued and begun working with.  His name was Petrie, and he was two years old.  He was depressed due to neglect, with some feathers plucked and a hell of a temper – he bit anyone and anything that approached him. 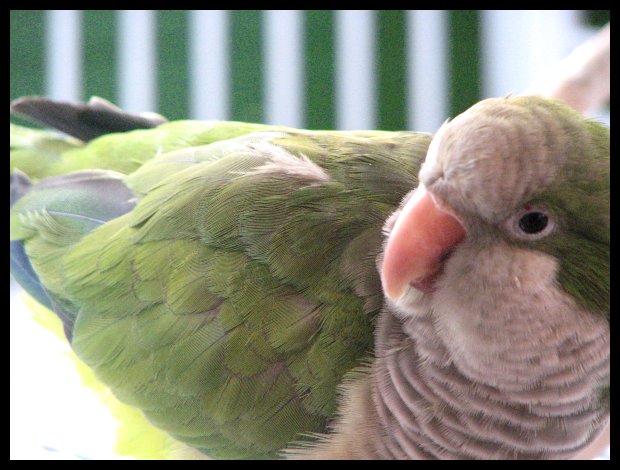 Linda taught me how to pick him up with gloves.  How to spend time with him within his comfort zone.  How to remove him from his cage where he was so territorial.  Slowly he began to warm up to me, trusting me to hold him without gloves (after removing him from the cage with them).  I lost chunks of skin from my fingers in the process, and I’m certain my hearing has been damaged from his squawks, but over time he began to trust me.

And I began to trust in patience, and love, and truly caring about the welfare of another creature.  I liked my other birds, sure – but I loved Petrie.  I called him my little boyfriend when he started exhibiting courting behaviors.  I took him wherever I could and watched movies with him every night.

A year or so into my journey with Petrie, I wandered into a pet store (which has since been shut down, thank goodness), and I happened upon Kiwi.  Kiwi was alone in a cage in a bright store, surrounded by dogs barking and too many kids running over to poke their fingers into his cage and try to teach him swear words.  He was being fed a diet completely unfit for a parrot, and given no positive attention by the store employees.  He bit and barked like a dog.

Petrie didn’t like the competition for my attention, and for five years they sat beside each other in separate cages – screeching when the other was allowed out, attacking each other if given the chance.

I considered giving Kiwi up, but he was endearing.  He actually talked -happily, frequently, and with variety.  He didn’t like being held, but he did like attention.  They were like night and day, two little opposite boys, and I adored them both.

They slowly tolerated each other, sans affection.  And then I had to give them up.

When I got them back, I was terrified they wouldn’t remember me.  They were slightly more friendly towards each other, Kiwi seemed utterly indifferent towards me – but Petrie knew me right away.  He was cautious about me, but there was no doubt he remembered me.

I brought Petrie on a bunch of errands with me one day.  We picked up pet food, a birthday present for my brother, and drove around for hours.  At the end of this little journey, he was cuddled up beside me, exhibiting courting behaviors.  We were bonded again.

Over the next few years I graduated the birds to a large cage they were forced to share – and their tolerance for each other became affection – they cuddled up at night, they preened each other, they played.

I’ve kept, trained and adopted out dozens of birds.  But Petrie and Kiwi are my children.  As of now, I’ve had Petrie for twelve years, Kiwi for eleven.  They’ve got average lifespans of 25-30 years.  I joke with boyfriends that I’m a single mother with two perpetual toddlers I can cage.

So when I decided I wanted to travel across the country I knew I had to take them with me.  I bought them a cage to live in at our various long-term stops, and a carrier to stay in for the car.  Though they are definitely uncomfortable at times, they adapt so well to my lack of routine.  Though they’re confined for a few hours a day to a small cage, they spend that time preening, cuddling and eating – and when I take them out they don’t harbor a grudge against me for sticking them in there.  They just happily come out and cuddle.

Kiwi’s my snuggle-buddy.  Petrie loves to adventure and check out his surroundings.  Kiwi is happy to sit in the cage and talk to me for hours, telling me he’s a pretty birdie and knocking and peekaboo-ing.  Petrie loves to get in front of whatever I am doing and steal the attention.

They are my children.  So you can still raise an eyebrow at me, but do you really need to question my taking them with me?

Here’s a video of the boys in the hotel room.  Don’t judge my pajamas.  I was laying around being lazy with them.

2 thoughts on “The Birds”

"Avens O'Brien makes amazing eggs. I don't know if it is her subtle use of apple cider vinegar, her delicate sprinkling of salt and pepper, or her expert use of a cast iron skillet, but whatever it is, her fried eggs are superb and dare I say addicting." - Cassandra Lynn (2012)
Load More...